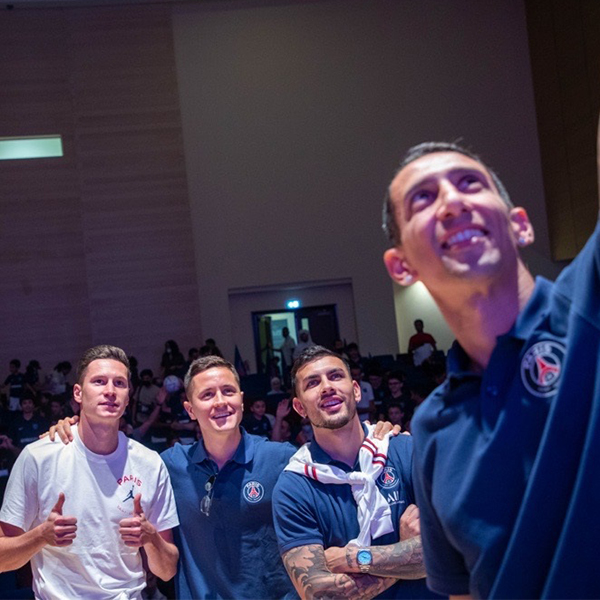 The Football stars from Paris Saint-Germain have met and been quizzed by soccer-loving children from the PSG Academy in Qatar, and Qatar Foundation’s community sport programs, at Education City.

Over 100 children gathered at Awsaj Academy, part of Qatar Foundation’s Pre-University Education, armed with questions for the players from the French football champions. The session saw the players speak about everything from when they started playing football to how it feels to be global stars and what it takes to be a top player, before taking pictures with the young fans and signing autographs.

The session started with PSG midfielder Ander Herrera saying: “I am very happy to be here with all of you and to see all the great work they are doing here in Qatar to promote football.”

Eight-year-old Telian, from France, asked Leandro Paredes if being the best player on the team as a child is a must for anyone that hopes to become a professional player one day? “Becoming the best is a journey; one that comes with commitment and a lot of discipline,” the player replied.

As a child, I trained a lot and ensured I got better and better every day. The main thing is to keep practicing because practice makes perfect.”

Explaining what his best memory as a professional footballer has been so far, PSG star Angel di Maria said: “It’s impossible to pick one memory – it has been a lifetime of favorite memories.

“I started playing football when I was a little boy, maybe three or four years old. I remember falling in love with it right away and was fortunate to receive all the support I needed to become the player I am today.”

Shavon, a 12-year-old member of the audience, was curious to know if there is a particular diet that the players follow to stay fit. Applauding the question, Herrera said: “The reason we have made it as professional players is that we take care of our bodies, and a critical part of taking care of our body is being mindful of what we eat.

“The human body is like an engine and the food we eat is what serves as its petrol, so remember to eat healthy and nutritious food if you want your body to perform well. At the end of the day, what you eat and the way you treat your body will determine how you perform.”

The session ended not with a question, but a statement from four-year-old Fares Lutfi, who wanted to let the PSG team know that he was going to be “the next best football player” and particularly asked the French side’s Julian Draxler to watch out for him. Draxler jokingly responded by saying” “I will remember your name, Fares – just call me when you are ready to go professional and I will be happy to represent you as your agent.”

The players were also given an overview of QF’s programs and initiatives in the fields of education, science and research, and community development during their time at Education City, which included a balcony tour at the 2015 building (QF Headquarters). The PSG Academy in Qatar has been established through a partnership between the club and QF.