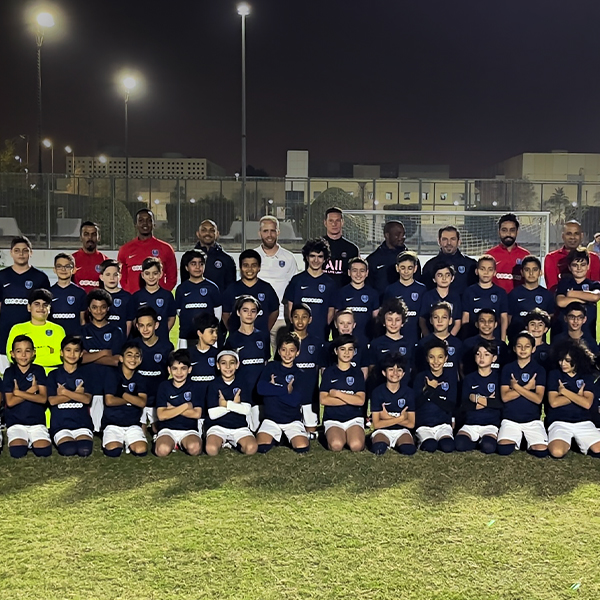 The Paris Saint-Germain midfielder travelled to Qatar last week to undergo treatment at the Aspetar Centre of Excellent. An opportunity for the German international to go and meet the young members of Paris Saint-Germain Academy in Qatar, but also to kick-off the ‘PSG Ooredoo Qatar Cup’.

During his time in Doha, the player from the capital visited the biggest site of the Academy Paris Saint-Germain in Qatar located at the College of the North Atlantic. The German international also attended the elite teams’ training sessions, where he was able to meet and talk with the children from the Académie Rouge et Bleu.

“We need academies like this one in order to bring new players through the ranks for our teams and also to bring a smile to the faces of the children because they all love football,  explained Julian Draxler. They love Paris Saint-Germain, and I could see it in their eyes that they were really happy that I am here. I watched them train, and they are already very good!”

Founded in 2019, the Paris Saint-Germain Academy Qatar already boasts 8 sites across 4 cities in the country. With more than 1600 members, the Academy is the largest soccer school in Qatar. “I heard that there are already two thousand children in the academies, commented the Paris Saint-Germain midfielder. That’s a lot! We all began like that. I could see that they were really enjoying themselves.”

After an unmissable trip around the Academy, Julien Draxler took part in the closing ceremony of the ‘PSG Ooredoo Qatar Cup’ on Sunday 28 November, after 11 days of competition for the 12 teams involved. The final of the tournament saw ‘Okocha’ face Team ‘Messi’ at the The Perle Island in Doha. For the occasion, the youngsters involved in the Cup had the pleasure of seeing Julian Draxler kick-off the first ever final. The German international posed for photos and spoke with both teams – to the delight of all of the youngsters! Team ‘Messi’ were clear winners, taking home a 5-1 victory, and in doing so were crowned the first ever winners of the tournament.

A trip to Doha that was largely filled with his hard work at the Aspetar Centre of Excellent: “I spent almost a week in Doha, I already feel a lot better. I had great facilities at my disposal where I was able to work. I had everything I needed! The first time I went to Qatar was in 2013. Since then, lots of things have changed. The stadia are ready, and the training pitches are incredible. Everything you could need as a footballer, you’ve got it in Qatar. I am certain of that.”

Since then, the German international has returned to the Ooredoo and is finalising his preparation with the hope of getting back out onto the pitch as soon as possible.